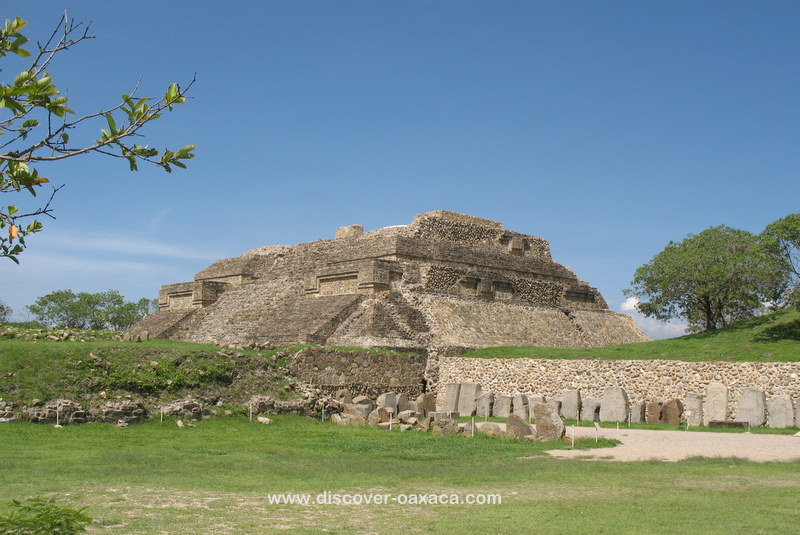 Located on a mountaintop some 4 miles to the southwest of Oaxaca City, the archaeological site of Monte Alban, along with the historical center of Oaxaca City, was listed as a UNESCO World Heritage site in 1987.

This ancient place is less well known than some of Mexico’s other archaeological zones, such as Chichen Itzá and Teotihuacan, but no less important. This was the first urban center of Mesoamerica and the capital of Zapotec civilization. Once known as Dani Baá to the Zapotecs, and Ocelotepec to the Aztecs, this site is now named Monte Alban (“white mountain”) for the white flowering trees called casahuates which flourish in the area and bloom in November and December. In order to build the city, the top of the mountain was flattened off, and the architectural plan was laid out; tons of rock and dirt were moved and used to construct a new sacred landscape. The architecture of the site is on a grand scale, characterized by massive pyramids and immense open spaces. When we contemplate the human resources, materials, and logistics necessary for such an undertaking, it becomes clear that this was a highly organized civilization.

The archaeological record tells us that the construction of the site began in about 500 B.C., a few centuries before the founding of Teotihuacan. Although it never attained the size of Teotihuacan, the Zapotecs maintained control over the Oaxaca valley and the surrounding region for over 1000 years from the vantage point of their mountaintop capital.

The inhabitants of Monte Alban made several important intellectual achievements. They developed a calendar and writing system (as yet undeciphered). They used the number system inherited from the Olmec civilization. They had astronomical knowledge, which can be seen in the alignment of certain building features with celestial phenomena. Their architectural and engineering abilities are obvious. There are also clues pointing to the extent of their medical knowledge.

Monte Alban was deserted some seven hundred years before the arrival of the Spaniards. The Zapotec people abandoned the city and subsequently, other sites in the valley flourished (Yagul, Zaachila, and Mitla). Many Zapotecs remain in the valley and continue to speak their language; today there are over 400,000 speakers of Zapotec.

Alfonso Caso, a Mexican archaeologist, began a major excavation of the site in 1931. During his first year of fieldwork, a tomb was found which contained a spectacular treasure that surpassed anything that has been found in Mesoamerica to this day. The treasure contained over 400 pieces of gold, silver, turquoise, and intricately carved bone. This is not a Zapotec treasure but was deposited by the Mixtecs in a later re-use of a Zapotec tomb. The majority of this treasure is on display in the Museum of the Cultures of Oaxaca, in the Santo Domingo Cultural Center. Gold jewellery from the Treasure of Tomb 7 on display at the Santo Domingo Museum.- Creative Commons photo by hmerinomx

From Building E, the highest point you can climb on Monte Alban’s North platform, you can take in a spectacular view of nearly the whole archaeological site, the expanse of valley around it, and the surrounding mountains, and get a sense of how the design of the site reflects the natural landscape and blends harmoniously with its surroundings.

Although this site still holds many secrets, it is clear that its original inhabitants possessed substantial knowledge of architecture, engineering, astronomy, and art. Beyond what the archaeologists have been able to discern, it’s a place that has a distinctive energy – whenever I’m there I have a feeling of peace and connectedness. Maybe it’s because of the site’s antiquity, or perhaps the ancient Zapotecs chose that spot because it was a special place to begin with, but it is certainly a location that seems to hold great power.

Join us for a day tour of Monte Alban.